This game is between none other than Frank Marshall and Amos Burn. Both lived to about the same age, but they are 30 years apart in this contest. Marshall is of course in fine form in 1907. Burn during his hayday was referred to as one of the 6th best defenders in the world by Nimzovitch. Burn’s defensive strength must have been a tool of his youth. This puzzle is a useful and instructive way to stop white’s, “h” and “g” file antics that result from sacs on h5!  If you play the Pirc, Modern, Kings Indian, Trompowski, or London, this is a must know position! 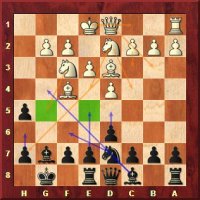